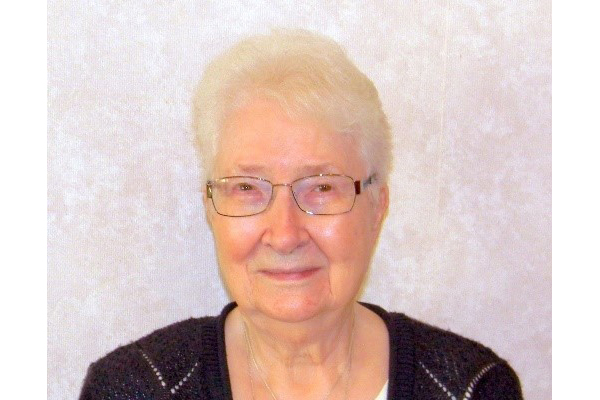 We have just learned, on November 23, 2022, of the death in the USA of
Sister Anita PAUL
Name of religious sister: Sister Jeanne Benigna
Year of religious profession: 1950
Age : 92 years old

May God welcome her in his light!

Sr. Anita Paul, 92, a member of the Daughters of the Holy Spirit, died on November 23, 2022 at St. Joseph Living Center in Windham, CT.
Born on December 31, 1930 in Washington, VT, the daughter of the late Felix and Antoinette (Roberge) Paul, Sr. Anita entered religious life in 1949 and made her religious profession on August 23, 1950 at the Mother-House in Saint-Brieuc, France. She was then known as Sr. Jeanne Benigna. She earned a B.A. in education from Diocesan Sisters’ College, South Woodstock, CT and a M.A. in religious education from St. Michael’s College in Winooski, VT.
She taught in Chicopee, MA and Fitchburg, MA before being named Directress of Novices in St. Hubert, Canada in 1967. Returning to the US in 1973, she was principal in Tupper Lake, NY and of St. Anne School in Waterbury, CT before ministering to migrants in Maryland and Virginia for 13 years. Within the congregation, Sr. Anita served as Provincial Councilor, Director of Continuing Education for the US DHS Province, Coordinator of the Provincial House community in Putnam and then Administrator of Holy Spirit Health Care Center also in Putnam. In 2008, she moved to The Card Home for the Aged in Willimantic, CT, recently moving to St. Joseph Living Center as her health failed.
Sr. Anita is survived by the Daughters of the Holy Spirit spiritual family – her Sisters in community, the Consecrated Seculars and the Associates. She is also survived by her sister Georgette Duval and many nieces and nephews, grandnieces, and grandnephews. She was predeceased by her brother Arthur Paul and her sisters Fernande Auger, Sr. Collette Paul, DHS, Olivette Kozey, Jeanne Sellers and Lauraine Paul.

In lieu of flowers donations may be made to DHS Retirement Fund, P.O. Box 497, Putnam, CT 06260. The Gilman Funeral Home, 104 Church St., Putnam, CT is on charge of arrangements.